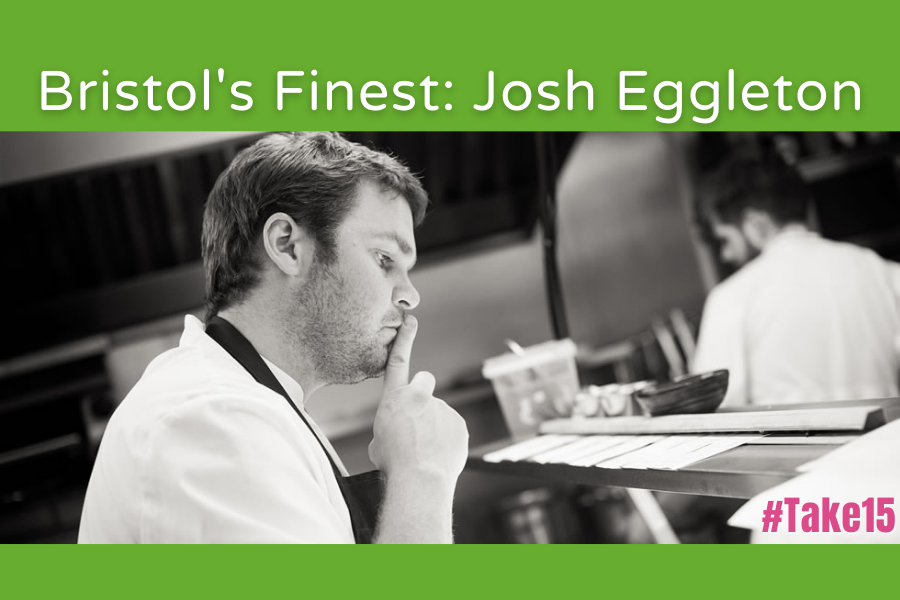 Join us in our #Take15 campaign and celebrate the local people and businesses who have inspired us over the past 15 years!

First up, the person who has kindly volunteered to sponsor our #Take15 competition: local chef Josh Eggleton. The prize?

Lunch for two at his new North Street Pony Bistro. (It’s opening on the 19th May, folks. Time to get excited!)

Who is this Josh Eggleton then?

Josh has been one of the names behind some of the leading local favourites when it comes to places to eat in and around Bristol for about 15 years, making him the perfect fit for our #Take15 campaign.

Starting with his and his sister Holly Eggleton’s famous Pony & Trap gastropub in Chew Valley in 2006, he also co-founded Yurt Lush back in 2012, opened the well-known Salt & Malt chip shop on Chew Lake a couple of years later, and the Kensington Arms in 2016.

He has also opened an in-city Salt & Malt as well as Root, a small plate sustainable vegetable restaurant, both in Wapping Wharf.

That’s all on top of being a Bristol Sport consultant, a Caple brand ambassador, a non-executive director of the Bristol Beer Factory, consulting on new culinary re-development B-Block in Keynsham, and re-developing the Eggletons’ original Pony pub as a community interest company. The big re-opening is slated for later this year.

Eat at the Pony Bistro!

Josh’s new Pony Bistro is opening on North Street on the 19th May. Serving “modern British bistro classics”, it’s going to bring the awesomeness of the famous Pony & Trap to Bristol.

Another partnership with his sister Holly Eggleton, we’re looking forward to getting our knees under the table when it finally opens.

If you’ve entered our #Take15 competition, thanks to Josh, you could be too! If you haven’t entered it yet, go to this page and enter the name of our O.G. (original Geek) a.k.a. moped guy.