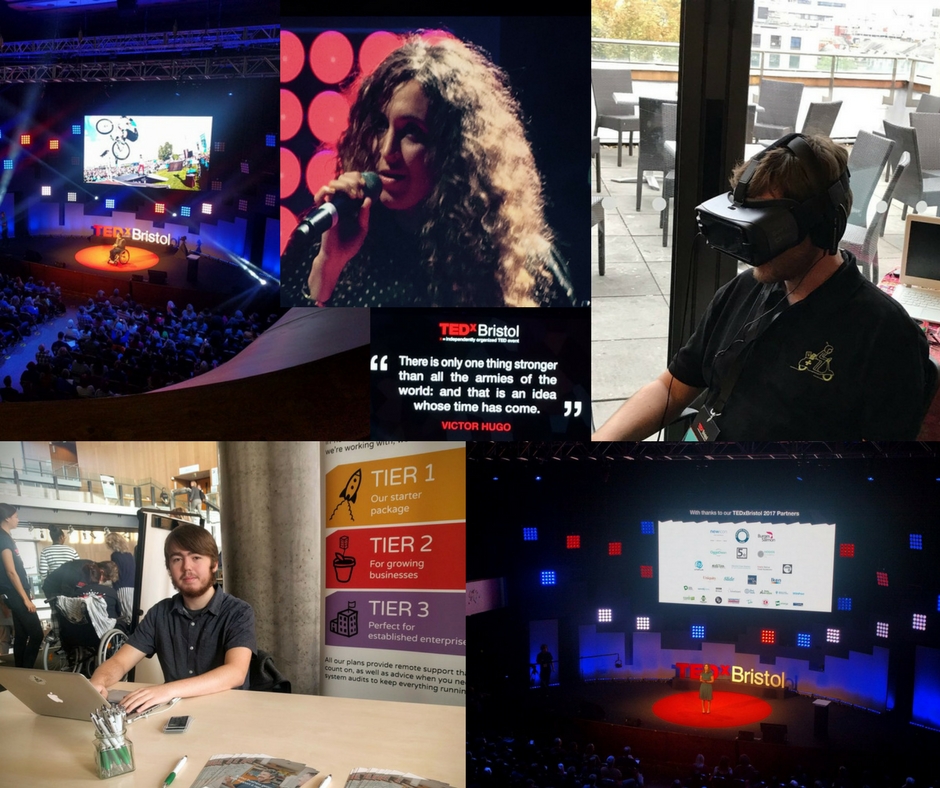 Dial a Geek were proud to sponsor the TEDxBristol event, which took place at Colston Hall on the 2nd and 3rd of November 2017.

The theme of the day was ‘Dare to Disrupt’, which gave ample room for a huge range of companies and individuals to talk about how they’ve changed their industries – and maybe the world, just a little bit – for the better.

If you’ve never come across the TEDx phenomenon before, where have you been? Central to TEDx are ‘ideas worth spreading’. Those ideas are spread primarily through a conference-style event. The talks are then available for free at www.ted.com. One visit to that website and you’ll wake three hours later a whole lot more educated!

Having several times tried to overcome my addiction to TEDs website, I was delighted to be given the chance to go to Bristol’s TED event. Dial a Geek had a stand there alongside other Bristol companies. We were all Community Partners, which meant that we helped the TED organisation bring people to the event who would otherwise not be able to afford it. Babbasa Youth Empowerment, the Knowle West Media Centre and others helped create 260 free places.

The group of stalls on the first floor was a wonderful snapshot of innovative Bristol companies. I spoke to people at Mind Doodle, makers of mind-mapping software, and Oracle Startup Accelerator, who provide cloud services and mentoring to start-ups in Bristol.

It’s impossible to properly summarise the range of talks at TEDxBristol. People talked of saving the environment, helping those at risk from gang culture, robots taking our jobs. There was live music too!

The theme – Dare to Disrupt – came out in so many different ways. Anna Starkey told us of the importance of curiosity. We need to keep our eyes and minds open to new things. We need to question everything: the way things are done, the things we are told, information handed down to us from ‘on high’. Our brains are good at short-cutting – don’t let it get away with that!

Clive Colledge also talked of stereotypes. And this was from a former adman who admitted to once working in an industry that thrived on categorising people! I never realised that Barack Obama and Nigel Farage are the same age. Would it be useful to advertise to them as 50-something males? Lose your own label, and connect with others

Dave McGoran tried to tear the label from robots-as-artists. We see technology and art as lying on opposite sides of a fence. We complain about encroaching technologies. But technology employed thoughtfully (e.g. in his mother’s anti-Parkinson implant) can reap wonderful benefits. Perhaps it’s time to be more mindful of the power our technology can give us, without us becoming slaves.

As well as the main talks, and sponsors’ stands, there were demonstrations and sneak peeks into other businesses. I spent some time in a Japanese garden, with a chap whispering in my ear to keep me mindful and in the moment. That virtual experience was courtesy of Whiley+Blake, who make interactive tools for businesses who need to present complex ideas to non-specialist audiences.

The event also had a number of salons, small break-away sessions which had more of a round table feel to them. I couldn’t make it to them this year, but hopefully will next time!

The event was summed with a line I hurriedly scribbled down. It’s from a poem read by Edson Burton, who also compèred the Friday: “Let no rules last, and when they are past let them go.”